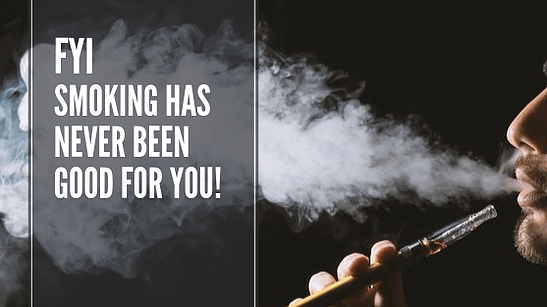 Tobacco has been growing wild for thousands of years. Some 1000-2000 years ago, users started chewing and smoking it during religious ceremonies.  Fast forward to the 1700’s and we find that smoking is now widespread with a tobacco industry in place.  It was at this same time the proof started coming in that tobacco and smoking are directly linked to poor health.  Now, some 350 years later, smoking is still embedded in our culture despite the dangers.

Through marketing and campaigns, smoking effects have gone from nominal too horrific.  Each generation has taken its own spin on the product.  And, most recently, e-cigarettes and vaping have become the latest fad and trend.  But, you may have heard about a mysterious string of vaping-related respiratory illnesses across the country.

As of this writing, the severe lung illness linked to use of e-cigarettes and vaping has spread to 36 states and is now blamed for six deaths, according to the latest figures from the Centers for Disease Control.  Some 400 confirmed cases have been reported and are under investigation.

Now, scientists may have found a clue to the cause:   all of the cases have a history of using e-cigarette products, or vaping, with most reporting they used products containing THC, the high-inducing element of marijuana. There are cases, however, where the patients reported only using nicotine, according to the CDC.  The investigation is looking at specific products and substances to find the link.  Much more research is needed to determine if it is actually the product or perhaps the behavior during use—how they puff and how long they puff.

While the specific cause is not yet known, the symptoms are all very similar.  Coughing, shortness of breath, chest pain, nausea, vomiting or diarrhea, fatigue, fever and abdominal pain have all been exhibited in the victims.

Although these vaping devices have had a very short history, the overwhelming call to action is clear.  The CDC recommends immediate cessation of e-cigarettes and vaping products.  The Trump administration has called for banning most flavored e-cigarettes.  And, in recent days, the city of New York is enforcing a full ban on the selling of these items.

Those who use vaping products and e-cigarettes as a tool to help quit the habit are concerned it may be taken away from them.  But with the ever mounting data, hospitalization and possible death it is encouraged to not purchase products off the street or modify or add any substances used in them.

The end result has never changed over time.  Smoking just isn’t good for you, no matter what you think.  Over the years, there has been failed promise after failed promise about low yield nicotine and tar products being safer.  But the death rates have never lowered; only different types of cancers have originated in the process.  The long list of chemicals used in various smoking devices (glycerine, propylene glycol, nicotine, tar, etc) have all been linked to cancer in one form or another.

Isn’t it time to choose your health and your life over your habits?  You might be addicted and it won’t be easy to quit, but the alternative seems to be reason enough to be motivated.  Why not quit today?  You won’t regret it.